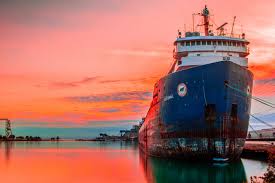 The climate is just getting worse year by year, with almost every attempt to stop the drastic changes looking as ineffective as it can get. However, that doesn’t mean that attempt to control these changes should stop. On the contrary, the size of these attempts should increase to bring about some noticeable change. Doing just that, eleven major banks have decided that the impact a shipping industry has on the climate will determine how much money they can borrow. The banks involved believe this effort will cut down the CO2 emissions significantly and will help improve the climate a bit.

Shipping is accountable for 2.2 per cent of the total carbon dioxide emitted in the world. The new guidelines for lending money to shipping industries are most likely going to be set in accordance with the International Maritime Organisation’s 2018 climate commitment, which aims at halving the CO2 emissions by 2050 when compared to 2050 and also to reduce the emission from individual ship by at least 40 per cent by 2030 when compared to the base numbers of 2008. This is the first time banks have integrated climate alignment strategy to their financial decision making capabilities. However, experts believe this is just the start of many financial decisions based on environment improvement strategies that will come up in the near future. Also, this will highlight the role of banks in controlling the pollution and helping the environment.